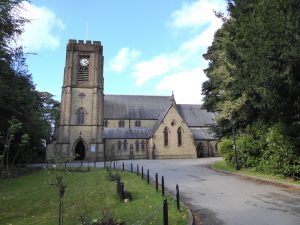 Prior to the early 19th century, Adlington and many of the districts around it were part of the ecclesiastical parish of Standish. At that time any Church of England residents in need of religious services would have had to make the journey to the Parish Church in Standish. The need for a church in Adlington was recognised in 1837 and in May 1838 the then Rector of Standish, the Reverend W. G. Orrett laid the foundation stone for what was to become Christ Church, located on Church Street (the A6), close to the junction with Railway Road. Christ Church was consecrated for religious services in 1839 and soon after, in 1842, Adlington became a separate parish also incorporating the districts of Anderton, Duxbury and Heath Charnock.

The first incumbent as vicar of Adlington Christ Church was the Reverend Thomas Carpenter M.A. Originally living in Chorley he took up residence in a new vicarage built for his use on land just off Railway Road, in 1854. This was to be of significance since the adjacent land to the south west of the then vicarage was, in time, to become the site for the church of St. Paul.

By about 1880 it was becoming apparent that Christ Church was too small to cater for the increasing congregation resulting from the increase in local population. In April 1883 Reverend Carpenter initiated the start of building of a new parish church, originally to accommodate 646 people, on the aforementioned land. The foundation stone was laid by the Right Honourable Colonel F.A. Stanley M.P. in November of that year and the new Parish Church of St. Paul was consecrated for religious worship in January 1885

Initially the new church building had neither the north transept nor bell tower, features that are seen today. Following the retirement of Reverend Carpenter in 1894 a new incumbent, the Reverend T.H. Minett M.A. took over as vicar. Unfortunately he initiated a style of service that caused a breakaway group of parishioners to form and establish the offshoot church of St. Phillip.

By all accounts their church building was a somewhat utilitarian structure that was erected on what is now the car park of Adlington Community Centre, off Mayfield Avenue. This lasted between 1900 and 1934, when there was somewhat of a reconciliation of the congregations. The church building was either demolished or removed and many of the offshoot congregation returned to worship at Christ Church once that building was again rendered suitable for use. Christ Church remained in use up to 1975 after which time it closed and the whole site sold off in 1981.

During his 27 years as incumbent at St. Paul’s between 1894 and 1921, Reverend Minett was very active in developing the church. He was responsible, amongst other things, for the enlargement of the vicarage, the addition of a Parish room and the founding of St. Paul’s Institute, the ‘Church Club’. He also instigated the construction of St. Paul’s School (the old infant and junior school buildings) in 1910 to the south side of the church. Additionally he maintained a keen interest in the local men who had been sent to serve in the armed forces during the First World War. After the cessation of hostilities in 1919 he proposed that a tower should be built adjoining the church to act as a memorial to those who had lost their lives. However, fund raising at that time could not raise sufficient monies to proceed with the project.

Reverend Minett was succeeded in 1922 by the next incumbent, Reverend A.H. Baker M.A. who served the parish for six years before his death in 1928. During those years of economic depression Reverend Baker’s major effort went into clearing church debts. It was not until his successor, the Reverend W.R. Coombs took over that the matter of building a church tower was raised again. The project finally came to fruition in 1932 when in November of that year Lord Stanley M.C., M.P., the grandson of Colonel Stanley, laid the foundation stone for the new church tower. The tower was eventually completed in 1935, which included a belfry containing eight bells together with a ringing chamber.

Reverend Coombs was succeeded in 1938 by the Reverend C. Gamble who was to be incumbent for the majority of the period of the Second World War. As previously mentioned a Church Club had been founded by Reverend Minett in 1903 and by 1906 the first phase of a wooden clubhouse had been constructed. This was completed by a second phase added in 1911. This clubhouse was commandeered to serve both as a recruiting office for the Army during the First World War and as a barracks for the local Home Guard during the Second World War.

Just prior to the cessation of hostilities, in 1944, the next incumbent to be installed was to be the long serving Reverend A. Hodgson, whose tenure lasted until 1962. He was replaced in 1963 by the Reverend F. Haworth.

By 1965 the original clubhouse was in need of substantial repairs and since the accommodation was also considered inadequate, moves were made to instigate the building of a new clubhouse. Following a period of fundraising, the current clubhouse was constructed and completed by the spring of 1972 with an official opening being performed in April 1973 by the Reverend E. Carter who had succeeded Reverend Haworth as incumbent in 1969.

By 1970 increasing pressure on accommodation within the existing school buildings brought about the construction of a new school building on land west of the church that had previously been used as a sports field. This new building is now known as St. Paul’s Infants’ School.

In 1975 it was considered that the original vicarage building was becoming increasingly difficult to maintain and was really too large for the needs of the parish. The building and land were subsequently sold off for residential use. After the disposal of the old vicarage, accommodation for the incumbent clergy was provided by the purchase of a suitable house in Grove Crescent. This was to be the home for the Reverend R. A. Andrew, who succeeded Reverend Carter in 1976.

This arrangement of a remote vicarage was only to be a temporary measure. In the early 1990s, under the incumbency of Father D. F. C. Morgan, who succeeded Reverend Andrew in 1986, a new, more modest, purpose built vicarage was constructed on land to the south of the church, adjacent to the original St. Paul’s School buildings.

It is this vicarage which remains in use today as the home of the current incumbent, Father D. A. Arnold, who was appointed as vicar of Adlington St. Paul’s in 2012. The original vicarage building is still currently used as a private dwelling and is referred to as ‘The Old Vicarage’.

A Moment in Time by Adlington & District Millennium Committee, 2015

Copyright © 2013 Your Info. All rights reserved.